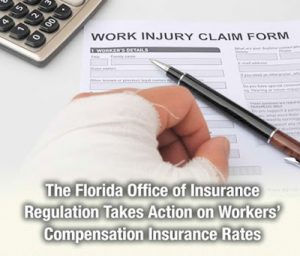 Tallahassee, FL – After a thorough review of the workers’ compensation insurance rate filing submitted by the National Council on Compensation Insurance (NCCI) and careful consideration of hundreds of public comments and testimony received from interested stakeholders, the Florida Office of Insurance Regulation (Office) has issued an Order (PDF) that gives contingent approval to an overall combined average statewide rate increase of 14.5% versus the requested 19.6%. Approval of the revised rate increase is contingent on NCCI amending the filing to include the recommended changes stipulated within the Order. As ordered by the Office, the revised rate increase would become effective on December 1, 2016 for new and renewal business, with no change in rates for current in-force policies. The amended rate filing must be filed with the Office for review and approval no later than October 4, 2016.

The NCCI rate filing was originally submitted in May of this year and amended in June to address the impact of three recent legal changes, including two Florida Supreme court case decisions (Castellanos v. Next Door Company and Westphal v. City of St. Petersburg) and legislatively-mandated updates to the Florida Workers’ Compensation Health Care Provider Reimbursement Manual (HCPR Manual).

If NCCI submits the required amended rate filing and it is subsequently approved by the Office at an overall combined average statewide rate increase of 14.5%, the individual rate impacts will include: